In Search of a Cross Platform Video Solution

On October 7, 2016 I published a post with an embedded YouTube video entitled Better Writing in Seven Minutes. I syndicated the post to a variety of social media platforms. While the production quality of the video was admittedly marginal, the post achieved significant social amplification through a number of related LinkedIn Groups.

I wasn’t aware that YouTube content couldn’t be played on the LinkedIn iOS application and began to wonder if:

Three video embed methods were provided in this post to test their functionality across multiple social platforms.

Below is a matrix of compatibility between the in-app social media browsers operating on Apple’s iOS and the three video embed methods evaluated in the post:

Update: It appears that LinkedIn has addressed the issue as I am now receiving audio when viewing the YouTube through the LinkedIn app for iPhone.

If you use a non-Apple device, please let me know about any issues you are having with the embedded videos on this page. If you forward me a description of your device and your results based on the above grid I will add it to this post and attribute it to you!

After I contacted LinkedIn I eventually received this response:

Wait… What? LinkedIn doesn’t have this functionality but might consider adding it in the future?!

Even more interesting is that LinkedIn’s in-app browser also prevents the user from opening the video in the YouTube iOS app using the typical iOS call:

While the option menu within the LinkedIn in-app browser allows the user to view the post in Safari, few users will go to this length for content.

Syndicating the post to LinkedIn Groups led to a 1,500% increase in traffic to my website. It’s pretty clear that video posts shared in the right LinkedIn Groups are exceedingly effective at generating web traffic. Unfortunately, that won’t do any good if people can’t hear the audio in the video! Crappy user experiences are invariably detrimental to brand perception.

Before and After Comparison

Prior to syndicating to LinkedIn Groups I was averaging a paltry 13 sessions/day, my average bounce rate was roughly 40%, and mobile devices accounted for 31% of my traffic. Remember, a bounce is defined by Google as a single page visit and then an exit. From RocketFuel’s article “What’s the Average Bounce Rate for a Website?” we know that a 40% bounce rate is pretty respectable.

Following LinkedIn Group Syndication I was averaging 208 sessions/day with 88% of those sessions landing on the video post. My average bounce rate increased 38 percentage points to 78%, which, according to the same article, is disappointing for anything outside a blog (and yes, this was a blog post).

Did the Audio Issue Matter?

So what impact did the video’s lack of sound in the Apple mobile LinkedIn app truly have on my bounce rate? Unfortunately, we’ll never be able to quantify it. There are simply too many factors that come into play that are outside of the data that Google Analytics collects including the inability to determine:

We know that 89% of mobile users’ time spent on media is done through an app. We also know that a user on a mobile app is more likely to land on content and then bounce back out to the app interface after finishing with the content. This behaviour helps to explain why bounce rates are significantly higher in mobile than they are on desktop according to RocketFuel’s article.

Mobile devices accounted for 52% of my traffic after the video post, a 22 percentage point increase from before the video. It’s worth noting that the bounce rate for mobile traffic to my video post was 81% and that Apple products accounted for 73% of my website’s mobile traffic. So ultimately I believe there was indeed some impact.

That said, despite the technical issues my website conversions increased from 10 the week before to 113 the week following the video post… so the news isn’t all bad. 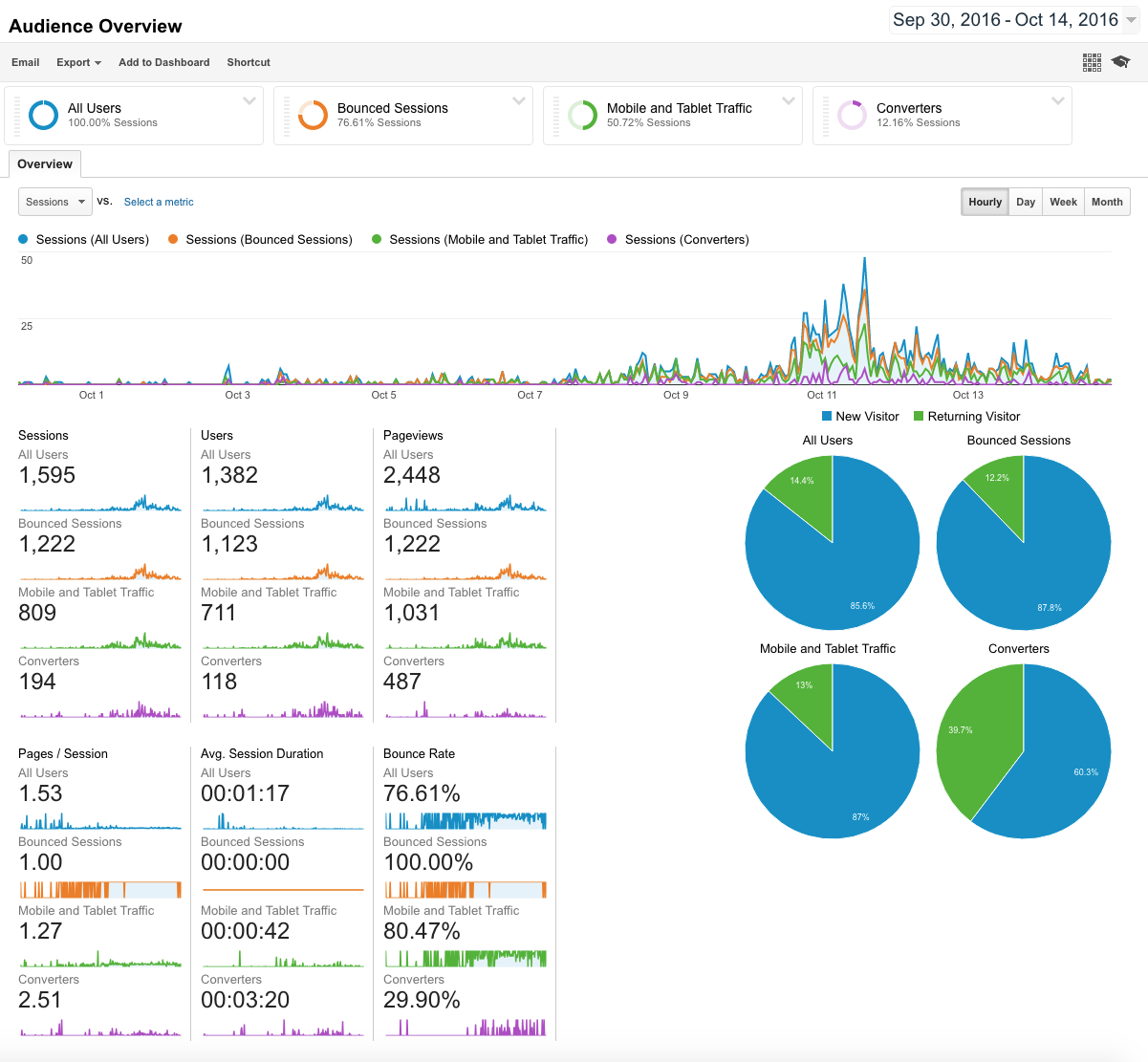 In a few weeks I will re-post the video with better audio quality. I want to be sure any traffic it generates can hear the audio!

To be safe, I think for future video posts I will designate the post in WordPress as a video post. This saves me from potential blow back if/when any of the above social media platforms become incompatible with one another either through innocent coding error or due to competitive positioning.

If you have any insights on this issue, please comment below!

Thank you for reading this article. If you liked it please share it on social media.

If you would like to receive a weekly or monthly summary of Market Climber’s Insights then please subscribe to our newsletter. In addition, if you have further questions or would like to speak with us please contact us.